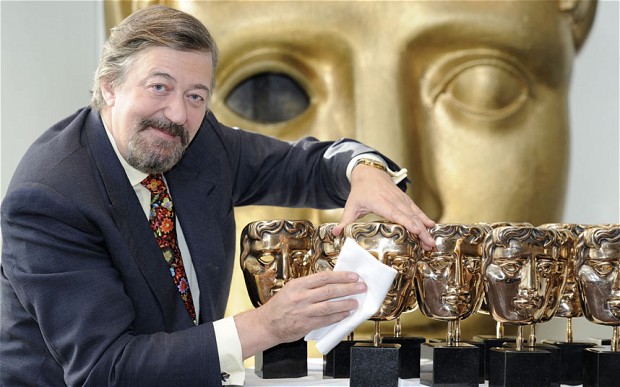 BAFTA host Stephen Fry with rather a lot of awards (Photo: BAFTA/bafta.co.uk)
Award season 2014 is in full swing and new nominations seem to be announced nearly every day.  So far we’ve heard pronouncements from the Golden Globes, SAG awards, Critics Choice, and Independent Spirit…all leading to the Holy Grail of statuettes, the Oscar.

BAFTA, the British Academy of Film and Television Arts, has also announced its film nominations for the year just gone by and it’s a very international hodgepodge indeed. While Hollywood is still the Mecca of all things show business, the multi-national trend of moviemaking continues to gain momentum. Determining the actual country of origin of any given film is an increasingly complicated task.  BAFTA and the British Film Institute have their own convoluted guidelines, including a culture test, which determine a movie’s Britishness. Let’s take a closer look at the BAFTA category of Outstanding British Film of the Year to discover what it takes to qualify.

Gravity. A Warner Brothers bankroll, a small cast of American superstars, and a Mexican writer/director – on its face Gravity is the least British film of the lot. It’s the things you don’t see that nudge this sci-fi thriller onto the Brit list.  David Heyman of Harry Potter fame produced it and the amazing special effects were created by a UK company called Framestore. Gravity was primarily shot at the famous Shepperton Studios outside London with most of the crew made up of local technicians and craftspeople. Thus, a virtual British engine hums beneath the exterior of an American space story.

Mandela: Long Walk to Freedom. Though the story is a South African one, Mandela has a great deal of UK talent behind it. Most obvious of course is the British on-screen presence of Idris Elba as Mandela and Naomie Harris as his wife, Winnie. The screenplay was written by Englishman William Nicholson and directed by Mancunian Justin Chadwick.  And though it sounds French, Mandela’s main production company, Pathe, is actually UK-based as well.

Philomena. Co-starring Dame Judi Dench and Steve Coogan, co-written by Coogan and fellow Brit Jeff Pope and helmed by director of The Queen, Stephen Frears, Philomena has plenty of British credentials. The convent scenes were actually filmed in Northern Ireland which, unlike Ireland itself, is part of the United Kingdom. Though half the film takes place in Washington, DC, Philomena’s humor and pacing ensure that it would never be mistaken for an American film.

Rush. A true story about the rivalry and friendship between Formula One racers Austrian Nicki Lauda and Londoner James Hunt, Rush is a tale with a distinctly European feel (despite being directed by Ron Howard aka Opie Taylor of my youth). What tips the scales towards categorizing Rush as a British production?

It was filmed in locations all over England, features a substantial supporting cast of British actors (including Greenwing favorites Stephen Mangan and Julian Rhind-Tutt) and is penned by prolific English screenwriter Peter Morgan.  If you’re a British film fan, the UK’s Working Title production company should also be a familiar credit on the screen.

Saving Mr. Banks. What could be more English than Mary Poppins? If you see Saving Mr. Banks, you’ll learn that Mrs. Travers and her famous creation aren’t everything they appear to be. A Disney production filmed in LA, what gives this movie its British cred can be summed up in two words…Emma Thompson. Throughout most of the story, she oozes British reserve, propriety and, dare I say it, snobbishness, making her more than worthy of her best actress BAFTA nomination. In addition, the words Thompson speaks with such distain were co-written by talented English newcomer, Kelly Marcel.

The Selfish Giant. This little art film is the one most of us will not have heard of until the awards season comes round and it is, of course, the most authentic production of the lot. With an all British cast and crew set in working class West Yorkshire, this modern adaption of an Oscar Wilde story is the epitome of hard hitting British social commentary.  Financed by the BFI Film Fund and written and directed by Clio Barnard in her first attempt at a feature film, The Selfish Giant may well be a sentimental favorite with the BAFTA voters for being a truly British piece of moviemaking.

Obviously the BAFTA awards include many more numerous categories than can be discussed here so if you’d like to peruse the entire list of Film Award nominees, click here.  And then be sure to check out BBC America’s broadcast of the British Film Awards on Sunday, February 16th at 8pm. The charming and clever Stephen Fry will once again host the festivities so prepare yourself for some witty banter.

Who is your choice to win the Outstanding British Film of the Year? Or perhaps your favorite overlooked in 2014?  Share with us in the comments section below.