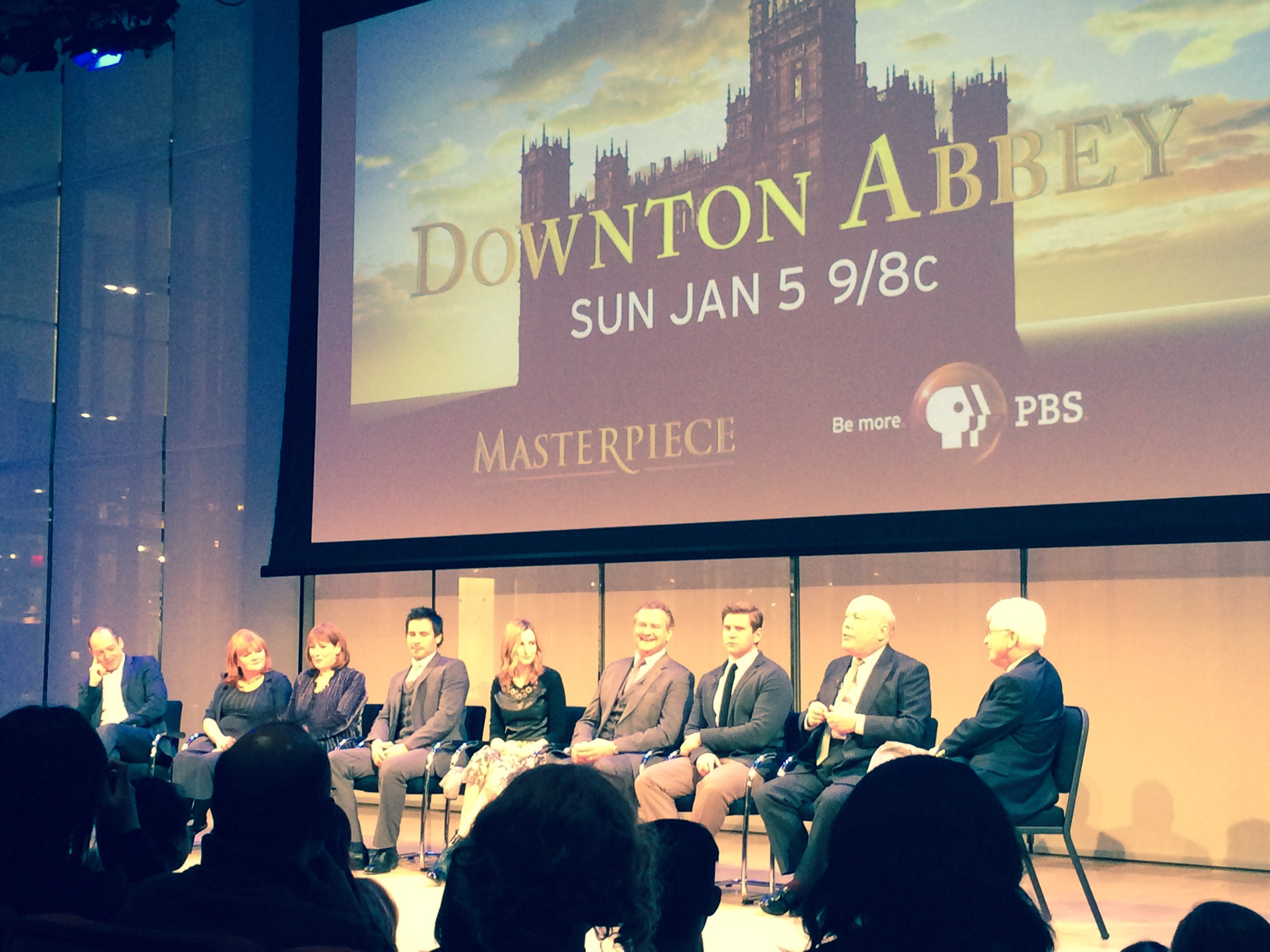 Hi guys – miss me? I was out of the office on vacation, which was lovely, but wow, it’s nice to be back! Tweet me with anything good I’ve missed!

Last week, I was privileged enough to attend a Downton Abbey fan and social media screening with the cast and producers in New York. Talk about an amazing opportunity! Not only did we get to see the first hour of Downton Series 4, we also got to watch a question and answer session featuring creator Julian Fellowes, producer Gareth Naeme, and several members of the series’ cast, including Hugh Bonneville, Laura Carmichael, Phyllis Logan, Allen Leech, Lesley Nichols, and  Robert James-Collier . The conversation was wide-ranging and super interesting – the Downton crew talked about everything from the new season, to how the show’s success has impacted their lives offscreen, to what things they miss the most abou the series’ 1920s setting when they have to return to real life.

Here are some highlights from my perspective, the best photos my iPhone camera could manage to capture (of course this is when my real camera battery decided to conk out!), and a link to watch the full Q&A panel yourself. Enjoy!

Firstly, it should be said that everything you’ve heard about the Downton Abbey cast is true. They are adorable together, and utterly charming, and clearly all great friends. It takes a special group to be able to do what is essentially a joint interview of this size, and, as a group, they’re just wonderful.

Here are a few of my personal favorite moments:

The cast talked a lot about the challenges involved in shooting in two such disparate locations – shooting at Highclere Castle, the real-life estate that stands in for Downton Abbey, and in a separate set that recreates the kitchen and servants areas. Lesley Nichols and Phyllis Logan said that they actually don’t see much of the “upstairs” cast during shooting, because their scenes are so servant-centric. Cast members like Robert James-Collier, who play roles that straddle the upstairs/downstairs divide more frequently (apparently this is also true for the gentlemen that play footmen as well) apparently have to between the two sets a fair bit.  One of the funniest parts of the night came when Logan started introducing herself to other cast members onstage, since she and Nichols don’t really get to mingle with the rest of them much. 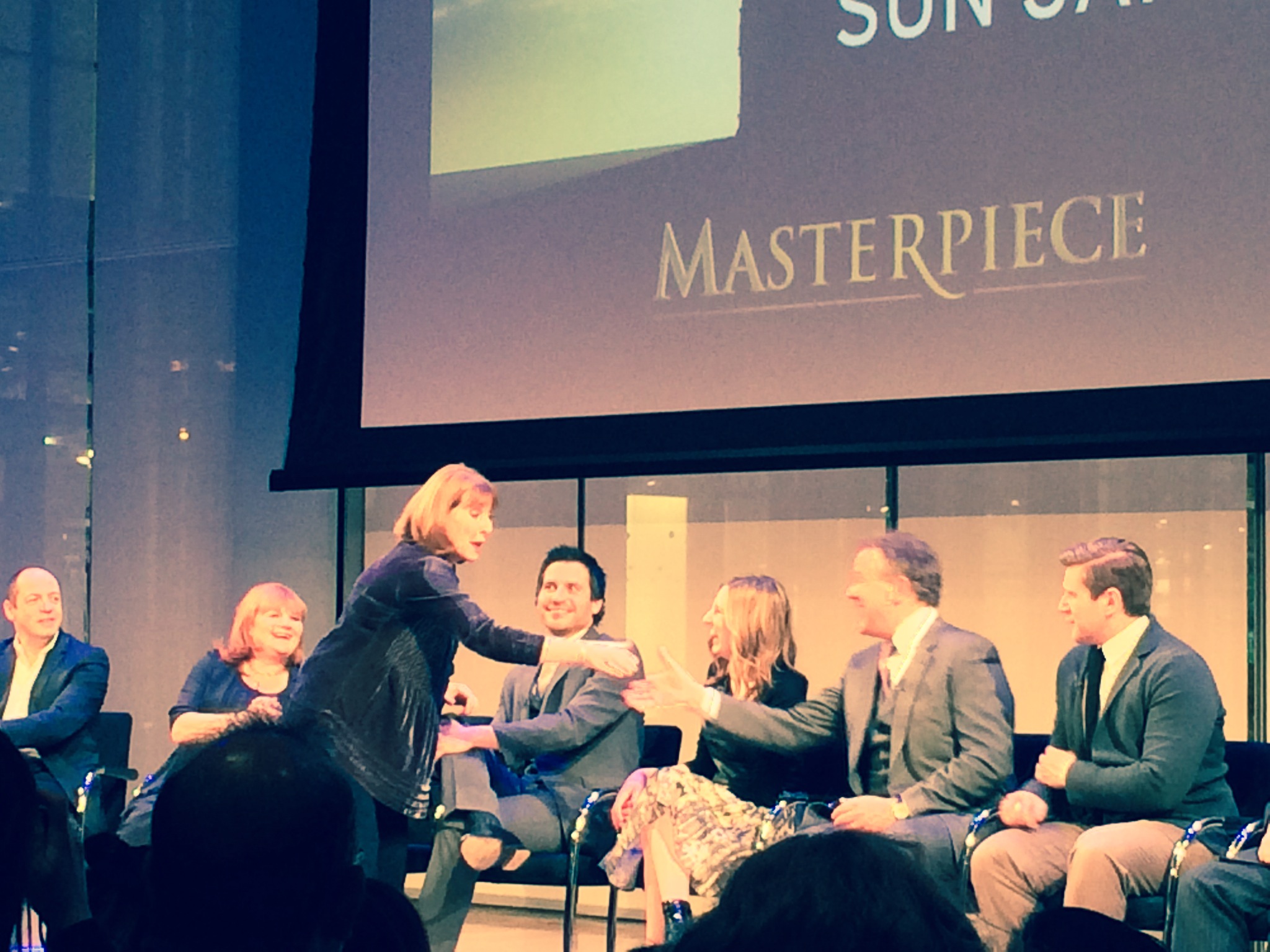 An interesting discussion came from a fan who asked about whether Series 5 would possibly air at a closer time in America and producer Gareth Naeme had a lot to say – stating that we’d all just gotten in the habit of the series airing in the Fall in the UK and January in the US, noting that should the series air in the States in September, it would face far stiffer competition from the slew of new programs fighting for viewers, and claiming while many of us are very tuned in to the show and to social media, the majority of US viewers aren’t, and that the delay isn’t really impacting the show’s success on this side of the pond. Though we’ve heard most of this before in various interviews, it was a fairly interesting answer, if only because producers aren’t usually quite so forthright about the advantages to not airing the show concurrently with the UK. Food for thought, at least.

Did you know that Lady Edith actually has a lady’s maid? Someone asked Laura Carmichael about this – why Mary and Cora have Anna and O’Brien, and why Edith apparently has to dress herself. Carmichael responded that Edith does have a maid – and that her name is Madge, we’ve just never actually seen her on the show. 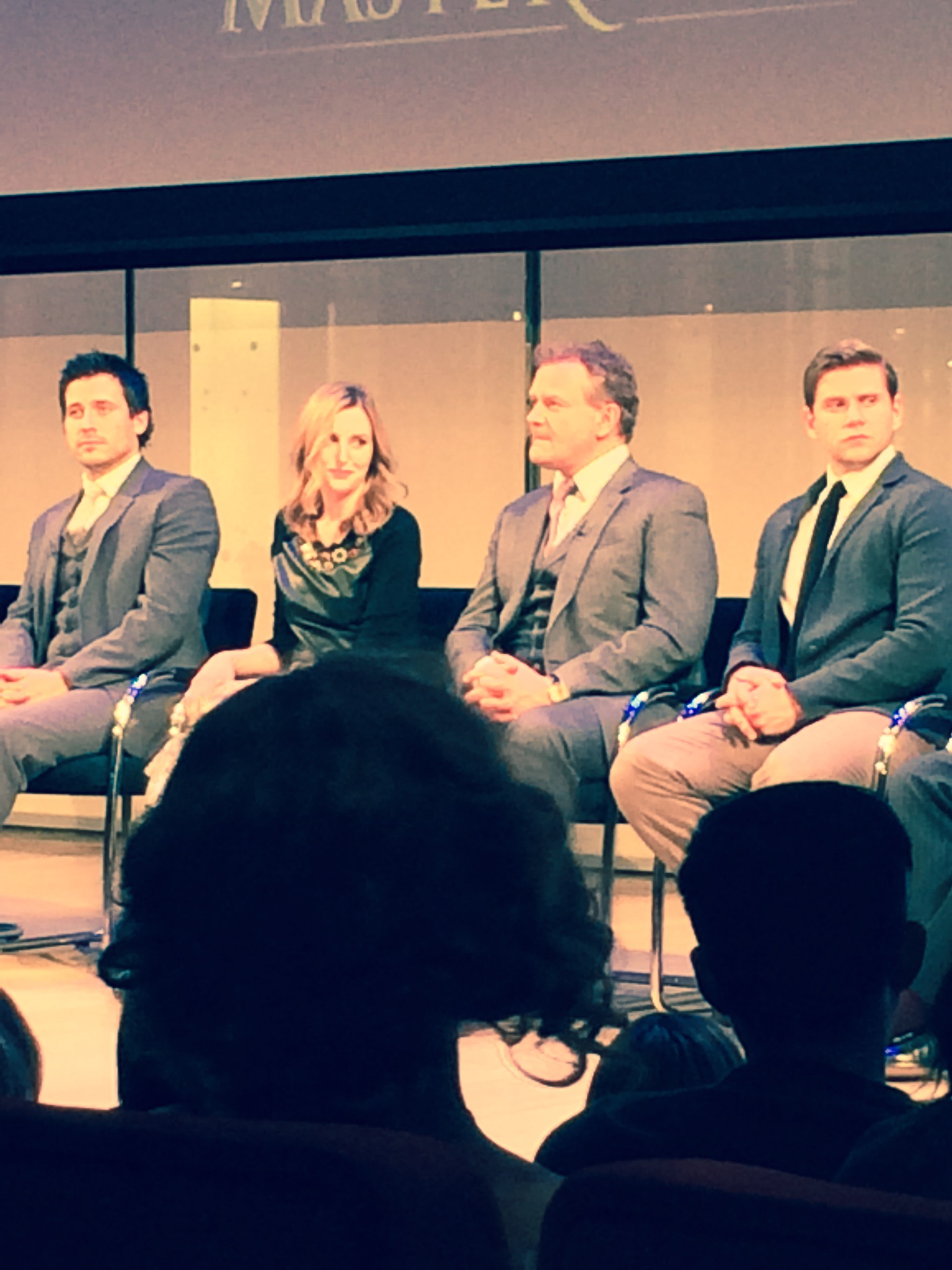 Break-out star of the night? It might surprise you – given how almost universally reviled his character is, but Robert James-Collier basically charmed everyone to death.  He’s really fantastic – funny and sweet and did I mention charming before? He made Thomas’s largely-reviled status among fans a running joke of the evening, cheering for fans who claimed that his character is merely misunderstood, and sharing his hotel room number (repeatedly!) with the audience. Not his actual hotel though, obviously – as that would probably be a serious security breach, and, as the actor himself said, less of a challenge.  It seems very likely that almost everyone at this event left with a slightly kinder opinion of Thomas, if only because of his portrayer being that awesome.

Biggest scream of the night? Interestingly enough, this moment didn’t happen during Robert James-Collier’s repeated references to his hotel room number (290, apparently), but rather when a fan asked Phyllis Logan and Julian Fellowes when Carson and Mrs. Hughes were going to finally going to work out their feelings for one another. The room erupted. (Personally, I’m a HUGE fan of this relationship, but it was still a happy surprise that so many other people are as well!) Logan looked pleasantly surprised at the audience reaction, and said that it was great that so many people were invested in this relationship between two older people, something that’s rather uncommon on television nowadays. She also said that it was obvious that Carson and Mrs. Hughes care for each other more than either of them have probably realized, and then demurred to Fellowes for an answer on the future. Which, of course, he then refused to provide, saying that we’d all just have to wait and see what happens (or doesn’t) between the two of them. Which is a total non-answer, but judging from the tremendously positive response to the question – both from the fans and the creative folks – it would seem that, if you’re keeping your fingers crossed for that particular relationship, there are plenty of reasons to be hopeful. 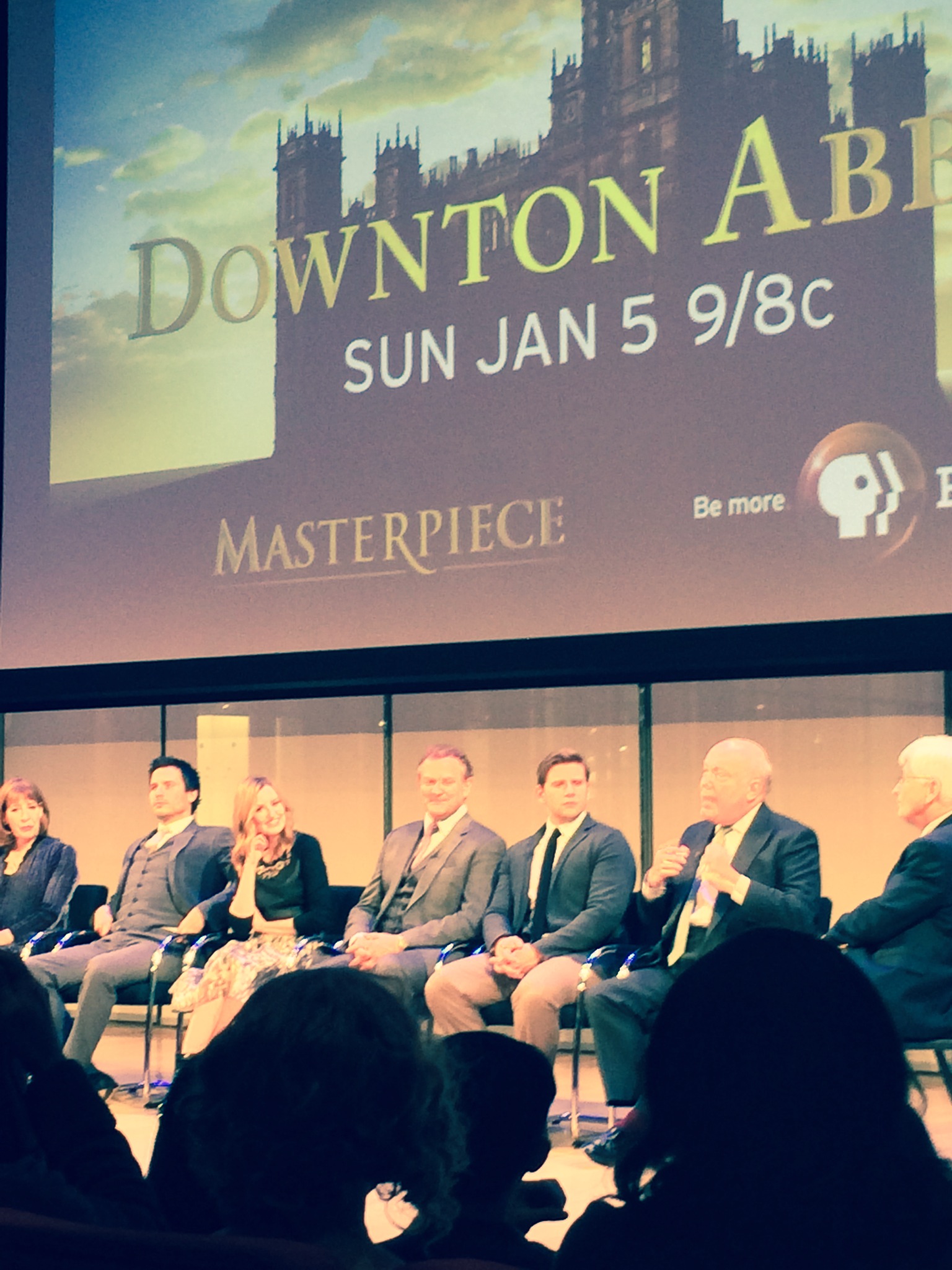 The inevitable Matthew questions were brought up, which the cast – probably well used to this line of inquiry at this point – handled with grace and ease, along with an explanation of how traditional television contracts in the UK work. Fellowes also pointed out that the gang has all remained close, even after the departure of Dan Stevens last year, revealing that the group had all gone out with Stevens for drinks during their stay in the Big Apple.

The event was filled with fantastic fans, who were all pretty much over-the-moon excited to see a snippet of the new season and get to hear from the cast themselves. There was lots of enthusiastic cheering and squealing, some great questions, and a general atmosphere of anticipation and joy that was simply lovely to be able to be a part of.

One amazing fan came to the event in costume – dressed in a really fantastic replica of Edith’s wedding dress from the ceremony-that-wasn’t – and got to ask a question of Laura Carmichael, and the whole exchange was basically the kind of moment that makes going to these events worthwhile.

You can watch the entire Q&A panel with the cast below – it’s a bit on the lengthy side, but well worth the hour or so it’ll take you to watch it. See below:

Oh, and as for the first hour of the new season? You’ll be happy. You really will. It’s lovely. Emotional and gorgeous and basically everything you want it to be.  And, if you’d like to see (MUCH) better photos than I managed to capture – check out the official PBS pressroom Flickr page, which has several great shots you won’t want to miss.

Let us know what you think of the Q&A in the comments? Got questions about the event? Let me know and I’ll see what I can tell you – without spoiling anything, of course.