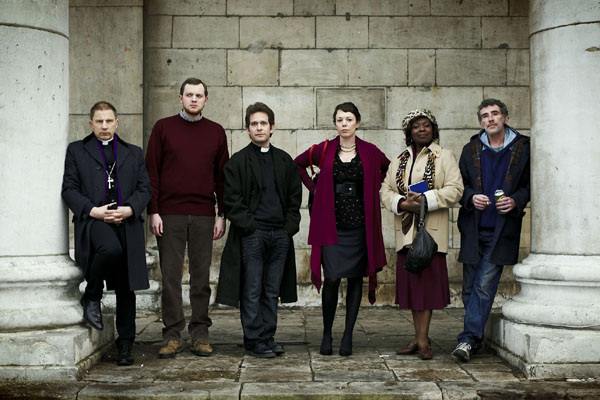 The cast of BBC comedy "Rev" (Photo: BBC)
While you may not know his name, I would wager most of you recognize the diminutive bloke with the dog collar in the center of the photo to your left. Don’t let his stature deceive you because at 5’5”, Tom Hollander is probably one of the most talented actors of any height working today. He’s played proper villains, spies, royalty, politicians and clergymen. He can menace and belittle with the best of them and then in the blink of an eye be as bumbling and endearing as you please. His secret weapon is his unpredictability and he uses it to great effect.

A working film and TV actor since the early 1990s, the demand for Hollander’s dramatic and comedic skills seems to increase with every passing year.  And each time I see him on the screen, big or small, I know I’m in for a quality performance.

Let’s look at a brief sampling of Hollander’s work below and perhaps you’ll get a better idea of what I mean.

The Very Thought of You (1998).  Known in the UK as Martha – Meet Frank, Daniel, and Laurence, Hollander plays Daniel, one of three friends who, in the course of a few days, independently meet and fall for the same woman. American girl in-search-of-self Martha (Monica Potter) encounters Daniel, a successful but pompous record business executive, on a flight from Los Angeles to London. Self-absorbed as he may be, Daniel does have a loveable side as well.

The Very Thought Of You - Trailer

At the time of its theatrical release, The Very Thought of You was marketed as the next Four Weddings and a Funeral without quite so many rich people. Also starring Rufus Sewell and Joseph Fiennes, you can find this fun Hollander film streaming on Netflix or Amazon Instant Video or to purchase on Region 1 DVD.

Gosford Park (2001). This classic ensemble mystery written by Julian Fellowes is the precursor to his even more successful venture, Downton Abbey. Hollander plays Commander Anthony Meredith, brother-in-law of the master of Gosford Park, the very disagreeable Sir William McCordle (Michael Gambon). During a weekend shooting party, Meredith plans to convince Sir William to invest in his scheme to manufacture boots for the British Army.  Alas, his pleas fall on stubbornly deaf ears, but could this meek yet financially desperate man be driven to murder?

Besides Hollander, Gosford Park boasts an unparalleled cast of British talent including Helen Mirren, Maggie Smith, Emily Watson, Stephen Fry, Derek Jacobi and on and on.  It’s available to stream on Amazon Instant Video or on Region 1 DVD through Netflix.

Cambridge Spies (2003). This mini-series is based on the true story of four Cambridge students recruited in the 1930s to spy for the Soviets. Hollander portrays the flamboyant Guy Burgess who, according to scriptwriter Peter Moffat, was “the loudest spy in the history of espionage, a gifted gob and wicked wit.” Despite these seemingly incongruous qualities for a career in espionage, Burgess and his comrades were apparently some of the most effective spies of their time and it is a perfect role for Hollander.

Cambridge Spies can be purchased on Region 1 DVD. I found it in my local library as well.

Pride and Prejudice (2005). A cousin of Elizabeth Bennet (Keira Knightley), a clergyman in search of a wife and the male heir to the Longbourn estate, Mr. William Collins is well-known for his dual purposes in this most beloved of Austen novels. He is introduced as something of a threat to the Bennet family’s financial survival but it quickly becomes apparent Mr. Collins’ presence is something more benign. His false humility and extravagant praise of his patroness Lady Catherine de Bourgh (Judi Dench) are pure comic relief.

Hollander won the London Critic’s Choice Award for Best Supporting Actor for his performance in this film. You can stream director Joe Wright’s adaptation of Pride and Prejudice on Amazon Instant Video or buy it on Region 1 DVD.

Pirates of the Caribbean (2006/2007). Tom appeared in two of the Pirates franchise films, Dead Man’s Chest and At World’s End as Lord Beckett, chairman of the East India Trading Company and subsequently a representative for King George II.  A man with a passionate hatred of pirates, Beckett targets all his devious, ruthless energies towards defeating Jack Sparrow (Johnny Depp) and his ilk. In the tradition of so many other great British villains, Hollander plays Cutler Beckett with cruel charm and elegance.

Both Dead Man’s Chest and At World’s End are available on Region 1 DVD and can be streamed from Amazon Instant Video.

In the Loop (2009). A spin-off film of the satirical political TV series The Thick of It, Hollander stars as MP Simon Foster, the Minister for International Development.  After Simon publicly bungles the government’s line concerning the possibility of war in Iraq, he is pulled into a nasty power struggle between American pro and anti-war legislators. Much scarier than bullying American politicians, however, MP Foster must face the terror that is Malcolm Tucker (Peter Capaldi).

In the Loop can be streamed on Hulu Plus, Netflix and Amazon Instant Video.

Rev. (2010-11). Reverend Smallbone is probably the most human character Hollander has played thus far in his career.  Adam is genuine, truly dedicated to improving and serving his intercity parish and has a touchingly honest relationship with God. He also likes to drink and smoke on a fairly regular basis, struggles to carve out time for Alex, his solicitor wife (Olivia Colman) and finds himself questioning his calling from time to time.

Both series of Rev. are available to stream on Hulu and Amazon Instant Video. And, for those who may already be Rev. fans (like me), series three is currently in production!

This list only scratches the surface of Hollander’s acting CV.  Do any of these performances peak your interest?  Which memorable roles have we missed?  We’d love to hear your input and opinions!