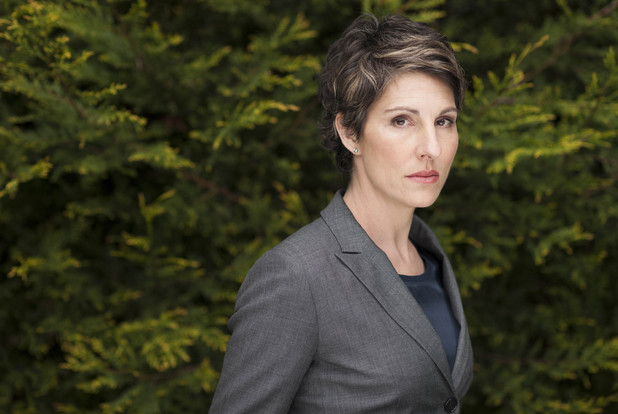 Tamsin Grieg in "The Guilty" (Photo: ITV/Hartswood Films)
The British actresses I like to watch most are the funny ladies. I have an affinity for British comedy anyway, but comediennes tend to show that awkward, less- than-perfect side that make them endearing; the type of woman you’d befriend rather than consider a rival.

The actress I’m introducing you to today is one of those funny ladies who isn’t afraid to look a little clumsy or less than lady-like. It just so happens I’ve copied her trademark pixie-esque hairstyle more than once. Odd how I never look anything like her afterwards…

Her name is Tamsin Grieg.

Haircuts aside, let’s explore a few of the highlights of Ms. Greig’s career thus far.

Black Books. As bookseller Bernard Black’s (Dylan Moran) best and probably only mate, Fran Katzenjammer (Greig) is just one of the blokes. Previously a gift shop owner herself, Fran is now unemployed and always on the lookout for a new career, and a new relationship come to that. But seeing as she joins in with Bernard’s copious alcohol consumption and a few other bad habits, she’s probably not all that much of a dream date herself.

Green Wing.  Green Wing is definitely one of my top five favorite comedies, and Greig’s performance as new surgical registrar, Caroline Todd is a big reason why.  When Dr. Todd arrives at East Hampton Hospital for her first day on the job, she is thrown into the midst of a bizarre and slightly scary land of sadistic administrators and less than welcoming colleagues. That is until she meets Dr. Macartney (Julian Rhind-Tutt), an enigmatic yet endearing surgeon.  Their on-again, off-again love story melts my heart every time I watch them together…or apart.

Tamara Drewe. This film took a long and complicated path from page to screen.  A modern reworking of the Hardy novel Far From the Madding Crowd, Tamara Drewe began as newspaper comic strip which was later compiled into a graphic novel.

Tamara (Gemma Arterton) is a journalist who has returned to Ewedown to sell her childhood home. Greig plays Beth Hardiment, a supportive wife who manages the daily tasks and guests at her husband Nicholas’ (Roger Allam) author retreat. Nicholas, a novelist and serial adulterer, takes an interest in his pretty young neighbor, as do a few others; however, it would appear that everyone gets what they deserve in the end.

Episodes. This Anglo-American sitcom is a collaboration between Showtime and the BBC. Greig and her Green Wing co-star Stephen Mangan play married couple Beverly and Sean Lincoln, award-winning TV writers in the UK. When they are persuaded to bring their hit sitcom, Lyman’s Boys, to the US, the American producers insist on changing virtually everything about the show including transforming the title character from an erudite, witty boys’ school headmaster to a less-than-scholarly, wisecracking boys’ school hockey coach.  Oh yes, and network exec Merc Lapidus (John Pankow) demands that the part of the coach go to Matt LeBlanc (Matt LeBlanc).

Matt LeBlanc is Not a Piece of Meat! - Episodes, Episode 3 Preview - BBC Two

Episodes’ third season is set for broadcast in January of 2014 on Showtime.

Friday Night Dinner. In this sitcom, Grieg  plays Jackie Goodman, a Jewish wife and mum who finds herself surrounded by hopeless men. She has two grown sons, Adam and Jonny (played by Simon Bird and Tom Rosenthal) who can’t stop fighting and pulling practical jokes on one another for five seconds. Then there’s her half-deaf husband Martin (Paul Ritter), who has an aversion to wearing shirts around the house and eats out of the trash bin.

Add to this her neighbor Jim (Mark Heap) who stops by the house unannounced during every Friday night Goodman family meal.  He’s basically a socially inept stalker who’s afraid of his own Alsatian named Wilson.  Despite having a pretty full plate dealing with her family, Jackie is known to make a very nice crumble.

The Guilty. And lest you think, she is an exclusively comedic actress, Greig has taken the occasional dramatic turn. In fact earlier this month, she starred in an ITV three part mini-series called The Guilty.

Described by the Huffington Post as “Broadchurch-vibed”, The Guilty focuses on the disappearance of preschooler Callum Reid from a neighborhood barbeque five years ago. Greig plays DCI Maggie Brand, an officer on the original case who is called back into the investigation when the boy’s body is finally discovered in 2013.

I haven’t gotten the chance to watch this one yet, but it’s certainly on my ever-growing list of must-see telly.

What about you, dear reader chums?  (I’m borrowing that phrase from Miranda Hart by the way - another actress for another post!) What Greig role has made you smile, even giggle perhaps?  Please share with us in the comments section.

British Actors You Should Know Tamsin Grieg The Guilty