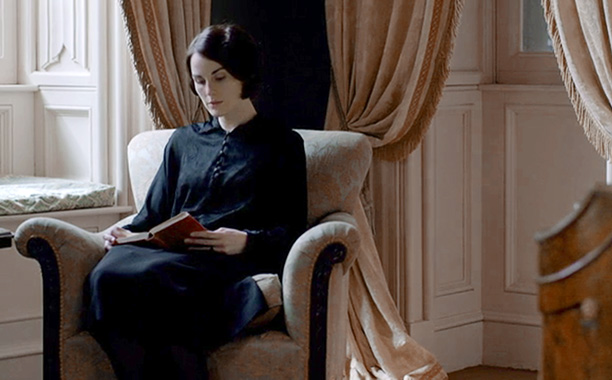 Michelle Dockery as Lady Mary (Photo: ITV)
Our lucky duck British friends get to start Downton Abbey Series 4 in the UK this weekend, so it’s understandable that we American viewers are both a.) a little jealous and b.) a lot desperate to see anything we can from the new season, to make our wait just a bit easier until January 5.

The new series starts six months after the tragic events of the Series 3 cliffhanger, and the Crawleys are all still attempting to deal with the fallout.

This latest clip just released by ITV won’t make the wait for Series 4 any shorter, but it’ll get you pretty excited to start making your countdown calendars as soon as possible. Take a look for yourself below. (Warning: there be spoilers here for anyone that’s yet to see the end of Series 3 yet, so tread with care!)

The fourth season begins with everyone still attempting to deal with Matthew’s death, particularly Mary, who doesn’t see m to be coping very well.  She wears black constantly and doesn’t seem that attached to her young son George. So, even though technically we’ve moved on six months time-wise, for Mary, it doesn’t seem as though she’s moved on much at all.

What does this mean for Mary in the new season? We already know there will be a bevy of new men on the scene – ostensibly as she’ s a well-off young heiress again – but it doesn’t look as though she’ll be interested any time soon. Michelle Dockery recently spoke to Vulture and explained, "It’s the nature of a woman of her particular class at the time. Mary needs to tie the knot again with someone soonish because of the responsibility that she has, so she needs the right person to replace Matthew. That’s not going to be easy. She’s not going to settle anytime soon." She went on further to say that Series 4 is “very much about recovery, it’s about starting again, building up her strength again. You’ll see, she just doesn’t want to go on anymore.”

It sounds heartbreaking to be sure – but also like it’s going to be incredible to watch. The countdown is on to January 5th!

You can watch the full trailer for Series 4 here. What do you most want to see in the new season?