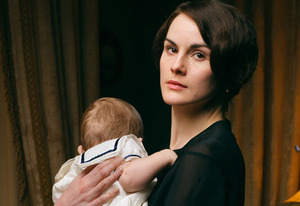 Lady Mary and Baby George (Photo: Courtesy of ©Nick Briggs/Carnival Film and Television Limited 2013 for MASTERPIECE)
It’s true – we’re all counting down the days (Hours? Minutes?) until Downton Abbey  returns. What will Series 4 have in store for us after the dramatic cliffhanger in Series 3? Who are all these new people we keep seeing in magazine spreads and entertainment articles? What will become of our favorite characters? Well, in a new clip from PBS, several of the Downton creators and cast give us (the briefest) look (ever) at what we can expect from the new season of everybody’s favorite costume drama.

Julian Fellowes, Gareth Neame, Michelle Dockery and Laura Carmichael discuss what we can expect to see this season for Crawley daughters, including a period of mourning and darkness for Mary and a surprising evolution for Edith.

They also do superbrief introductions to three of the new faces we’ll be seeing around Downton this year. (Warning, there be spoilers here if for some reason you’ve not finished Series 3 yet.)

Granted, this clip is shorter than we’d all like, but every little bit of Downton info helps, right? We’ve got to watch something while we count down the days to Series 4, so you do what you gotta do. (Oh, and if you haven’t seen the first ITV trailer for the new season, you probably want to go watch that right now. It’s wonderful)

Series 4 transmits this September in the UK, and will premiere on Janaury 5, 2014 here in the States.

Which character’s storyline are you most excited to see in Series 4? Do any of these new folks look especially interesting?