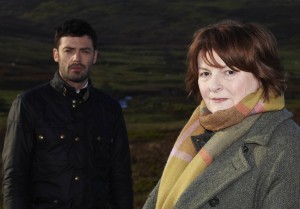 Vera stars Brenda Blethyn and David Leon (Photo: ITV)
Good news for fans of good stories and strong female characters: British mystery series Vera is returning for a third series in the UK shortly (and hopefully it won’t be too long thereafter for the rest of us, either!)

Based on author Ann Cleeves’ series of popular novels, the drama follows obsessive Chief Inspector Vera Stanhope as she tries to crack some of the toughest cases in Northumberland alongside her trusted right-hand man and surrogate son Joe Ashworth. Stars Brenda Blethyn and David Leon are both back as the series’ leads.

Watch the trailer for the new episodes below.

All we know about the new season thus far is the basic plot of its first episode: titled Castles In The Air, Vera must investigate the brutal murder of young physiotherapist Lizzie Faulkner (Eva Quinn) who was gunned down at a luxury country retreat. Meanwhile, the case brings DS Ashworth face to face with a part of his past he would rather forget. Dun dun dunnn.

In more good news: Vera has already been renewed for Series 4 by ITV, in advance of the show’s summer return. The fourth series will be comprised of four new episodes and is filming this year for a 2014 transmission.

Series 3 of Vera will premiere on ITV beginning Sunday, August 25th. No word as yet on when we can expect to see the mystery series make its way Stateside, but we’ll keep you posted. WETA aired the series on both our main TV 26 channel and our all-British subchannel WETA UK and the drama was a big hit with our viewers. So expect to see the third series show up in the not too distant future as soon as international rights become available.

Do you love Vera? Thoughts on the Series 3 trailer?