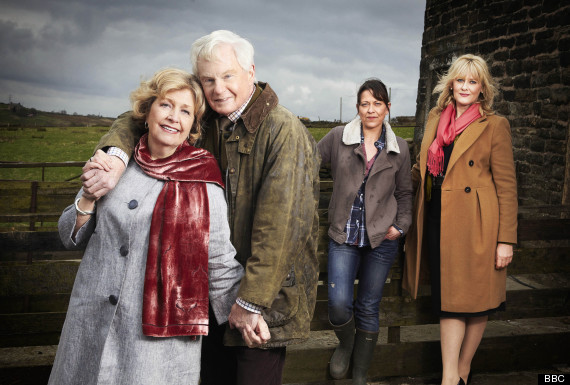 Ann Reid, Derek Jacobi, Nicola Walker and Sarah Lancashire (Photo: Courtesy of © Antony & Cleopatra Series Ltd. 2012)
Our PBS Annual Meeting took place in Miami this week – complete with lots of new programming announcements, previews, and other goodies. One of the most exciting bits of news to emerge from our annual conference is that acclaimed British drama Last Tango in Halifax will be coming to a PBS station near you this Fall! The series, which just won the 2013 BAFTA Award for Best Drama last weekend, has been quite popular in the UK, ranking as one of 2012’s top ten highest rated dramas.

The six-part series stars Sir Derek Jacobi and Anne Reid as childhood sweethearts Alan and Celia, who are both now widowed and in their 70s. The two rediscover one another via the magic of the internet and fall in love all over again. It also stars Nicola Walker, Tony Gardner, Dean Andrews and Nina Sosanya, among others. The series was written by Sally Wainwright, who was inspired by witnessing the happiness her mother's second marriage brought her late in life.

“As their lives collide for a second time, the couple laments what might have been as they take audiences on a life-affirming journey together. While their relationship is a celebratory tale of the power of love at any age, it is also a story about family and the complications the relationship causes, especially for their grown daughters," says the PBS press release. It’s a very sweet and moving story and the acting is – as you might expect give the series’ cast – top notch. Basically, it’s  adorable.

“I fell in love with ‘Last Tango’ and its stars from the moment I saw it,” said Beth Hoppe, PBS Chief Programming Executive and General Manager, General Audience Programming. “And love and family and all the complications that come with it are at the heart of this warm comedy-drama.”

Have a look at the BBC One trailer below – and let us know what you think:

Last Tango in Halifax will premiere on Sunday, September 8. The drama wrapped its first season in the UK this Spring and has been recomissioned for a second series, which is slated to start filming any day now (if it hasn't already).