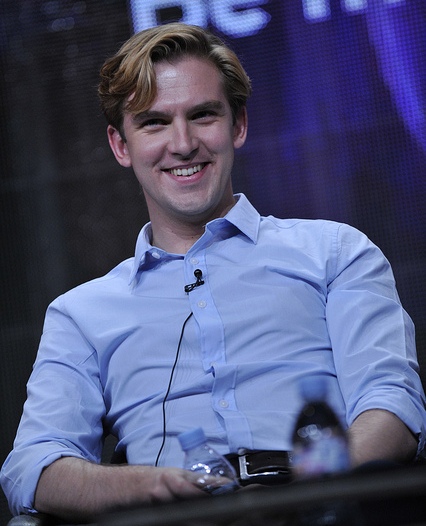 Many Downton Abbey fans around the world are processing the fact that star Dan Stevens will not be returning to the megahit costume drama for Series 4. We’re all dealing with that in different ways. For some of us, it involves eating a lot of ice cream, or indulging in embarrassing late night Series 1 marathons, or obsessively stalking tracking the actor’s every post-Crawley family move. Sometimes all three. (Not that I know anything about this personally. Cough.)

And Stevens has certainly been busy since departing Downton, with a variety of different projects, some of which sound quite interesting. Want to know what he’s been up to since leaving hunting dogs and period costumes behind? Click through for more – but if you still haven’t seen the Downton Abbey Series 3 finale for some reason , you’ll probably want to bookmark this post for later, because it’s got SPOILERS in it.

He’s Been Doing the Theater. Stevens just wrapped a limited run on Broadway in February, were he had been starring opposite Oscar nominee Jessica Chastain in a revival of The Heiress. While he ended up sporting some sideburns that surely Lady Mary would not have approved of, Stevens’ performance was well received and the play itself was one of the few Broadway productions this season to actually turn a profit.  (I happened to see The Heiress the week before it closed, and I can confirm that Stevens’ performance – as well as his American accent – was quite fantastic. I expect some Tony nominations.)

He’s Been Riding the Subway. At a party for Visit Britain’s Big British Invite – a promotion to encourage Americans to visit the UK – campaign, Stevens waxed rhapsodic to the Wall Street Journal about the New York City subway system, among other things. The actor says he “loves” the subway and is especially jazzed that it runs all night because the London Underground does not. If you are in NYC and have a hankering to run into Stevens on public transport, keep an eye out on the A, C, F, 2 and 3 lines, because the actor says he takes them all the time.

He’s Been Getting a New Look. Stevens has also been sporting a new look lately, complete with striking dark hair and a bit of facial scruff. (It also looks as though he has lost a bit of weight as well – not that he needed it!) Rumor has it that this dramatic makeover is for a new film role, but it’s certainly a big change from Matthew Crawley’s signature style. (It seems I may be one of the few folks on the internet who actually kind of likes this, but there you have it.) Here are some more photos so you can judge for yourself – thoughts on his new look?

He’s Been Making a Movie with Benedict Cumberbatch. Stevens’ first film in a post-Downton world turned out to be with another actor familiar to Masterpiece fans. He recently joined Sherlock star Benedict Cumberbatch for The Fifth Estate, a biopic about Julian Assange, the notorious founder of the Wikileaks website. Stevens plays a hacker named Ian Katz, who is a close friend of Assange’s right-hand man Daniel Domscheit-Berg (played by Inglorious Basterd’s Daneil Bruhl). It doesn’t sound like Stevens’ role is a huge one, but it’s still fairly notable that he’s involved with such a sure-fire awards contender. The film is due out this November.

He’s Got Two More Stellar Film Roles Lined Up. After The Fifth Estate, Stevens has also been attached to two more upcoming film roles. His dramatic makeover is apparently due to his role in the drama A Walk Among the Tombstones. The film stars Liam Neeson and tells the story of an ex-NYPD cop who is now a private investigator hired to find the kidnapped wife of a drug dealer.  Stevens’ role hasn’t been specified, but internet gossip insists that Stevens’s dramatic change in appearance is due to the fact that he’ll be playing a heroin addict (which explains the weight loss, I expect). Whether he’s playing the lead villain or just a lackey of some sort, wouldn’t it be interesting to see him playing an out-and-out bad guy? Interesting! This project is currently filming in Brooklyn and its release date is still TBD.

Stevens has also been announced to star in a new adaptation of Arthur Ransome’s 1930s children’s novel Swallows and Arrows. He’ll be playing James Turner – also known as Captain Flint - the uncle of Nancy and Peggy Blackett (the Amazons) who spend a summer enjoying a series of outdoor adventures with the Walker family (the Swallows). Also there’s sailing and camping and fishing and also some piracy. So you know, typical summer activities. The project is a joint production of BBC Films and Harbour Pictures, and no one one has any idea at all when it might be out either.

Man, being a fan of various actors sure does involve a lot of waiting around for things to come out doesn’t it? Still and all though, it’s very exciting to see Stevens finding so much professional success  - even if we will always miss him around Downton, too.

What about you guys? Are you excited to see Dan Stevens’ future projects, or was he only and ever Matthew for you?