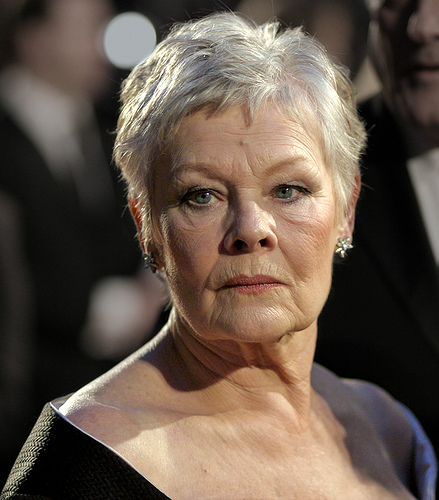 Is there room in the world for yet another Sherlock Holmes adaptation on television, with both the brilliant BBC Sherlock and not-quite-as-brilliant-but-mostly-serviceable-I-suppose CBS Elementary already on the air? Even if your gut response is to say no, this rumor might just change your mind. Because it’s that awesome.

It’s being reported that none other than Dame Judi Dench is under consideration to play Mrs. Hudson in a new TV adaptation of Sir Arthur Conan Doyle’s classics. (Yeah, just let that sink in a minute. Judi Dench! Oscar winner and all around amazing actress!) Of course, there is no real confirmation for this story anywhere, other than a bunch of sources linking to Daily Mail piece that’s since been pulled from their website, but the rumor is so fantastic it’s hard to not to want to believe it.

British comedy writer Barry Cryer is said to be working on yet another Holmes series for television, called A View from the Landing at 221b Baker Street. This adaptation is based on the fictitious journals of the Baker Street boys’ long-suffering and always awesome landlady (not housekeeper). The script has been penned by Cryer and his son Bob, and apparently both are adamant that the Oscar-winner is perfect for the part.

Given this premise (and Cryer’s background), it seems safe to assume that this proposed Holmes series might take shape as one of two types of programs (or possibly a combination of both) – a version that’s closer to a comedy than a drama or one in which the great detective is not a main character or is, at least, seen much less frequently than we’re used to. I mean, if you’ve an actress of Dench’s caliber in the role, surely her Mrs. Hudson would be able to carry her own show, right? Of course one could always assume this particular version of the famous landlady could just pop in and out to dazzle everyone with her awesomeness a few minutes out of every episode (a la Dame Maggie Smith in Downton Abbey), for the sake of variety, let’s assume that wouldn’t be the case. This is all just wild speculation obviously, but it’s nice to dream about a totally (or at least predominantly) fresh take on how we tell Holmes stories.

Given the worldwide success of Sherlock and Elementary, as well as the Guy Ritchie films, it’s no surprise that another version of the great detective is being planned in some form. Here’s hoping that the speculation about an actress’ of Dench’s caliber being involved means that it might actually see the light of day! The idea of the Holmes and Watson story told through the eyes of Mrs. Hudson is incredibly appealing and manages to feel fresh, even in a world where we already have dueling modern-day consulting detectives competing for audiences’ attention.

Thoughts? Would you be into a Holmes series featuring Dame Judi? What sort of show would you want it to look like?