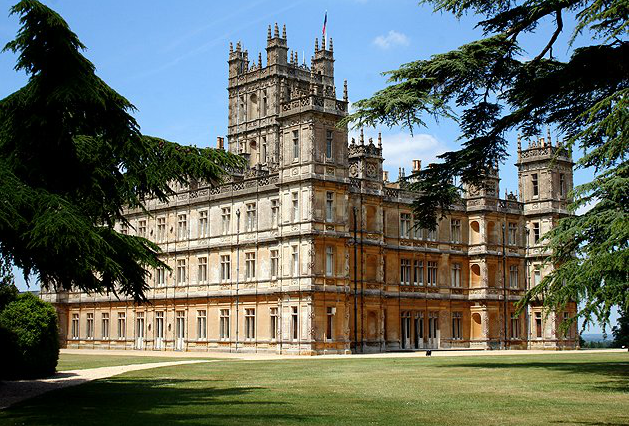 Downton Abbey creator Julian Fellowes is currently developing an American period drama for NBC, focused on New York City in the 19th century.  Tentatively known as The Gilded Age, it would appear that the drama is set to give Manhattan society in the 1880s the American version of the Downton treatment.

Per the press release, the series is described as “an epic tale of the princes of the American Renaissance, and the vast fortunes they made—and spent—in late nineteenth-century New York.” The Gilded Age will doubtless present the many professional challenges and personal tribulations of America’s first millionaires who helped shaped the city and pioneered innovations in business, transportation and industry.

"This was a vivid time," Fellowes said,"with dizzying, brilliant ascents and calamitous falls, of record-breaking ostentation and savage rivalry; a time when money was king." Per the Daily Mail online (which, as always take with a grain of salt), The Gilded Age could screen as early as Fall 2013. The Mail further speculates that Fellowes’ new drama could include fictionalized versions of famous figures like J.P. Morgan, John D. Rockefeller, Andrew Carnegie or Cornelius Vanderbilt.

The concept sounds intriguing – but is it something that Americans will watch?

Fellowes has certainly proven himself an outstanding writer; Downton Abbey is wonderful television. Personally, I would certainly give anything he produced a chance – though, let’s be honest, his recent Titanic miniseries, while occasionally entertaining, was pretty forgettable overall. However, the interesting bit of this story is not really that Fellowes is making a new television show (that’s awesome), nor that it’s airing on an American network (which is also awesome, given our annual wait for Downton to make its way across the pond), but rather, the subject matter. Last year Shonda Rhimes of Grey’s Anatomy fame also tried her hand at putting together a costume drama about 19th century New York (called Gilded Lilys), but that series never even made it out of the pilot stage.

That this is the second drama in a year to focus on the “Gilded Era” in Manhattan makes a certain amount of sense – it’s certainly America’s most obvious corollary to the Edwardian drawing rooms made popular by shows like Downton and Upstairs Downstairs. The time period is full of dramatic, larger than life figures (Rockefeller, Vanderbilt, Morgan, Astor, etc.) with equally dramatic life stories. Throw in the rapidly shifting cultural landscape of America in the late nineteenth century and you have basically all the fixings for some very interesting stories.

However, it does beg the question – will American audiences watch American period drama? To be clear, I don’t mean American-produced period drama, I mean period drama about America. Given the smashing success of Downton, it’s surprising that there isn’t more of such programming on American schedules already. (Remember how every network had a vaguely sci-fi show with overly complicated internal mythology on their air the year after Lost premiered?) But, BBC America’s Copper (interestingly enough, also set in 19th century NYC) and the FX Western Hell on Wheels are the only two “real” period dramas on any major network schedule at the moment. Though I suppose you could also count AMC’s Mad Men, but New York in the 1950s and 60s seems a bit far removed from the era we’re considering here.

It could be argued that part of Americans’ fascination with costume dramas has always been because such series are just so quintessentially British. Sure, when it comes down to it they’re really just vaguely soapy dramas about ultra high-class families in fancy dress, but they also represent a society – or a point in societal history – that is completely alien to us as Americans. We’ve never had an aristocracy – or more specifically, the peerage – in this country.  Sure, we have wealthy families and business success stories and American pseudo-“dynasties” like the Vanderbilts or the Astors, but this has nothing on the Brits’ centuries-old class system and traditions.  Programs like Downton Abbey could be said to be so popular because viewers enjoy this window in to a type of society our country (and American culture) never really experienced. It’s fascinating in large part because it’s both familiar and alien at the same time.

Will American viewers find American period drama equally fascinating? Will we care about New York bankers and businessmen in the 1880s as much as we care about Britain’s landed gentry in the 1900s? It will be interesting to find out. What do you all think? Will Americans embrace costume drama about their own country or are US viewers more interested in hearing British accents along with their fancy dress? Leave your thoughts in the comments.