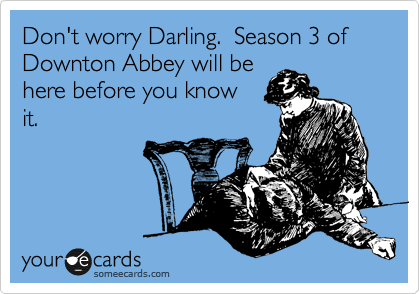 Apparently, the internet will never stop creating amazing Downton Abbey-related things for my our enjoyment. Not quite sure how I’ve missed out on seeing this one so far, but better late than never I suppose!

Ladies, in case you need to explain Downton to your significant other so that they can understand what you’re talking about while you’re dealing with the variety of emotions we all must face while waiting for Series 3 to come to America – well, this is for you.  “The Boyfriend’s Guide to Downton Abbey” is a six-minute recap of everything that happens in Series 1,complete with a voiceover of cynical boyfriend-provided commentary about what’s going on. It’s actually pretty hilarious – especially the bits about Edith really being Meg from Family Guy and Mr. Bates being Batman.  Click through and have a look for yourself.

Warning for a bit of strong language here and there, as well as some occasionally dumb jokes:

The Boyfriend's Guide to Downton Abbey

Apparently, this same group has created an additional Boyfriend’s Guide to Downton Abbey: Series 2, Part 1, which is longer and a bit less funny, but still worth watching. Sadly, there doesn’t appear to be a Series 2, Part 2 clip yet that I can find, but I’m going to keep an eye out.