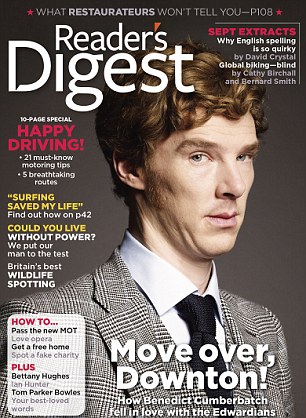 I was actually torn about writing about this little online brouhaha at all, given that I think it’s kind of incredibly silly and mostly pointless, but since I know that many of you are fans of everyone and everything involved in this, it seemed worthwhile. And also it’s just really bizarre, even if I am Team Benedict in almost every general circumstance.

So, Sherlock star Benedict Cumberbatch has been making the press rounds the past week or so, ostensibly to promote his new BBC Two period drama Parade’s End, which also happens to be an Edwardian World War I series that’s not incredibly unlike another massive costumed hit that airs on a competing network.

This has led to an unexpected bit of a mess all over the British papers, thanks to an interview Cumberbatch gave (believe it or not) to Reader’s Digest magazine, of all places. This, in turn, immediately followed another bit of a Cumberbatch kerfuffle over an interview quote in which the actor complained he felt overly typecast because of his presumed “posh” background. Oh, Benedict. Just taking it on the chin this month, dearie.

Anyway, in this Reader’s Digest interview – which honestly I cannot believe we are about to seriously discuss something scandalous happening in Reader’s Digest, what year is this – while discussing Parade’s End, Cumberbatch allegedly had some harsh words for the second series of mega-hit Downton Abbey. “We’re living in a culture now that’s revering, or having a nostalgia trip with, the beginning of the 1900s,” Cumberbatch is quoted as saying. “Although Downton traded a lot on the sentiment in the last series…but we won’t talk about that series because it was, in my opinion, f---g atrocious.” Cumberbatch then goes on to insist that Parade’s End is “more sophisticated” and “more unusual,” claiming that “you rarely see a piece about this class of people that’s this accurate, funny and pointed.”

Cue the internet firestorm. Obviously, Downton Abbey has a huge fanbase, and folks who love the show were pretty justifiably ticked off. I get that – it’s hard to see criticism about anything you love, particularly when it seems to come out of the blue like this and from someone who is probably involved with something else you love, too (Sherlock).  And, somehow, things just got even weirder from there. Keep reading for Twitter wars,  my thoughts on the whole mess and the video of Cumberbatch's response on BBC's The One Show.

Personal opinion: As you all probably remember, I enjoyed Downton Abbey Series 2, but felt it did drop off fairly sharply in terms of quality from Series 1, mostly due to some atrocious decisions about the series’ pacing, that I hope Series 3 is planning to correct. After all, even Downton star Elizabeth McGovern herself also expressed some concerns about the quality of Series 2, before she probably got in trouble for it insisted that her original statement on the subject was misinterpreted. I think Cumberbatch’s comment is horribly worded (or horribly edited, either way, though the latter requires a supplemental conversation about how modern journalists are apparently terrible) – I don’t think I’d go as far as to emulate his particularly colorful phrasing, no matter how much I disliked it – and as someone who generally works in public relations I would have encouraged him to find a less inflammatory way to express his opinions. That said, I do find his candor incredibly refreshing – it’s so rare that actors are actually willing/allowed to have legitimate opinions about anything, that it really is a breath of fresh air to see a famous person say they didn’t like something in quite such strident terms. (To be honest, I’d love to know why he feels like that – I have a hunch he’d be quite the entertaining television critic.)

Unfortunately, it’s highly likely that such comments are automatically going to be interpreted as arrogant (which, to be fair, is a little bit true) or ungrateful (given that Downton Abbey’s success is probably a large reason Parade’s End got greenlit in the first place). There’s a legitimate discussion to be had somewhere in here about popular media and what television expects from (or ought to expect) from us as a viewer – is it better to watch a show that’s “enjoyable” or a show that is “sophisticated” and why don’t we ever seem to expect that programming really ought to try to do both of those things – but of course that is, and has been, completely swamped by the fact that, for better or worse, Cumberbatch apparently insulted the most popular television show on the planet.

In response, in a display that is so purely British you can’t help but laugh at it, three of the main cast of  Downton Abbey all changed their Twitter avatars to Cumberbatch’s Reader’s Digest cover, which was branded with a “Move over, Downton” tagline. Since the entire lot of them are at least casual acquaintances, if not outright friends – there seems to be no one in British entertainment that isn’t practically BFFs with everyone else in the industry – this comes across more as good natured ribbing to me than outright snottiness, but I’m sure there are folks out there that disagree with me. (They've since swapped all their avatars back, but did leave them as the Cumberbatch cover pretty much right up till Parade's End premiered on Friday.)

In the latest installment of this apparently neverending saga – Cumberbatch appeared on the BBC’s The One Show over the weekend to promote Parade’s End, talk about his Olympics opening segment and at least partially address this whole Downton fiasco. They played a game called “Cumberfact or Cumberfiction” which attempted to set the record straight about all the recent press mess. (Shorter version: Things were taken out of context, Cumberbatch has been friends with/has great relationships with basically the entirety of the Downton crew, nothing to see here, etc.) Watch the entirety of his appearance below.

Benedict Cumberbatch - The One Show 24 August 2012

Thoughts? Do you think Cumberbatch royally stepped in it, was misquoted by the media or was totally right? Does it make you think less of British actors who get caught up in this sort thing or is the best advice to never trust anything one reads in the papers? Curious to know.