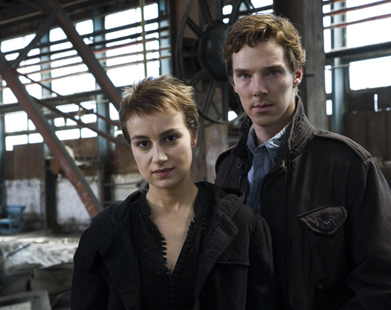 While we're waiting (ever so patiently and apparently for such a very long time) for Series 3 of Sherlock to both get filmed and appear on our TVs, why don't we take some time to appreciate the extensive back catalogs of the series’ stars? Luckily, we can all get started this weekend on this obviously very important project.

This Saturday on the WETA UK Movie, get your Benedict Cumberbatch fix - we’re airing The Last Enemy, a thriller set in the not-too-distant future which explores how technology and fear can create a dystopian society. It also stars Once Upon a Time’s Robert Carlyle, as well as Annamaria Marina and Hotel Babylon’s Max Beesley, but let’s face it, aren’t we really all most interested in the Cumberbatch Connection? (I may be projecting a bit, but still. I don’t think I’m too far off the mark.)

In The Last Enemy, Cumberbatch plays Stephen Ezard, a reclusive and brilliant mathematician who returns home to England to attend the funeral of his brother Michael, an aid-worker who was killed by a landmine in Afghanistan. Stephen’s kind of spent a lot of time on his own in China, and struggles to reconcile the isolated world he left behind with the brother he barely knew, a London that is now practically a police state and a government seriously obsessed with being able to monitor its citizens’ every move. Creepy!

It’s hard to explain a lot more about this without giving to much away, but the gist is that while trying to make sense of his brother’s death, Stephen starts to uncover a lot of secrets – about his brother’s life and the work he was doing, as well as some government secrets and the kind of society that its trying to create. Conspiracy theories and lots of plot twists ensue Click through to check out a promo for yourself!

We’ll be airing the first half of The Last Enemy this Saturday and the second half next week (the 16th). So I doubt that I’ll be able to resist writing about this in some fashion. (Yes, that was a blatant suggestion that you should watch it so you can talk/snark/whatever about it with me. Subtlety, I’m good at it!)

It’s an interesting mini-series – very thoughtful and more than a bit unsettling, though some particular plot points I’m not crazy about – and definitely plenty to talk about. So keep an eye out for more.