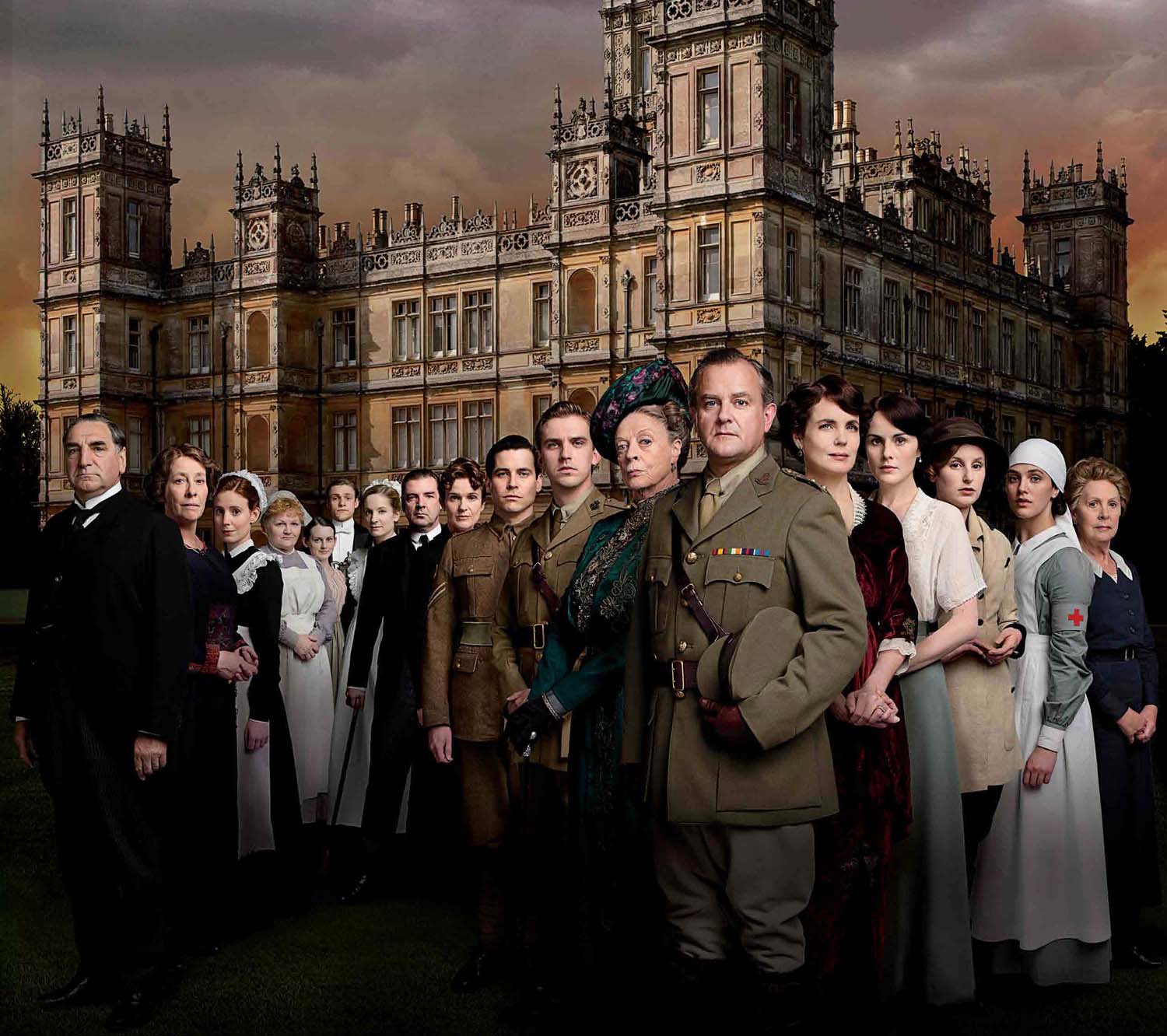 In the aftermath of the Golden Globes in January, several stories surfaced that Downton Abbey creator Julian Fellowes was considering turning his hit costume drama into a feature film. The Sun reported at the time that Fellowes was “virtually mobbed” at the Globes afterparty and was seen talking to numerous film executives about the possibility of Downton: The Movie. (How these folks know what people at these parties talked about specifically, I don’t know, but let’s go with it, for the sake of discussion.)

Downton star Hugh Bonneville insisted that fans jumped to conclusions after reading the reports from the Globes and denied that a feature film is being planned. Given the fact that the show’s cast and crew are all neck deep in filming Series 3, I doubt very much that a movie is being planned right now. But I don’t think that necessarily means we can rule out seeing a Downton film in the not-too-distant future.

Click through for more – and proof that I’ve spent way too long thinking about this!

Fellows has already proven his ability to write for the big screen with his Oscar-winning screenplay for Gosford Park (which also stars Dame Maggie Smith – coincidence? I think not!). In the wake of what is basically worldwide Downton mania, the prospect of a feature film must be incredibly tempting for everyone involved – particularly given the amount of money such an effort is likely to rake in hand over fist make. But how would a Downton movie work, exactly? The television series is so successful, for both ITV in the UK and Masterpiece here in America, that it’s difficult to imagine that anyone would even dream of allowing the drama to change formats in any significant way, even temporarily. The TV show has to stay the priority, as the flagship of the Downton experience, and any feature films that happen to get made must be ancillary additions to the overall story presented on the small screen.  In short, Downton: The Movie will likely always have to play second fiddle to its television counterpart, no matter how popular it is.

It’s a difficult challenge – any film will still have to feel like the “real” Downton in order to be successful, which means all of our favorite Crawleys and servants would need to be part of it, the look and feel of the show would have to remain intact, and the tone must remain the same. Any movie will also have to work as a standalone extra – viewers’ experience of the show cannot be affected by whether they have seen the film and the film can’t become a prerequisite for viewers to watch the next season at home on their televisions.  This means that the film has to tell a contained story, that’s interesting and fun to watch, without doing anything fans won’t understand – or will be angry to have missed out on – if they’re only viewers of the TV show and never see the movie at all.  And on top of all this, the film’s story has to be something that’s exciting or compelling enough to get moviegoers to plunk down the steadily increasing price of a ticket nowadays and feel like the experience was worth it. Whew!

So, what kind of movie would tick all the boxes? Well, the film would likely have to tell the story of some smaller single event in the lives of the Downton residents – perhaps an extra look at something specific that happened during the war or a “gapfiller” moment that took place between one of Series 2’s many many many time jumps. Another option would be to somehow flesh out one of the stories that didn’t really get as much focus during the series itself as it should have. Here I’m specifically thinking of something like Sybil and Branson’s entire relationship – perhaps a film would be a useful vehicle for expanding on their storyline some more without writing a new plot that the average viewer would feel “left out of” should they skip the film but stick to the show. We could see Sybil and Branson’s wedding and the start of their life in Ireland, how they’re both adjusting and whether Sybil’s strange preconceptions about having a “meaningful life” of work have come back to bite her yet. We could also have smaller “B” plots back at the main estate – to do a bit of filling in the gaps between the events at the end of Series 2 and Christmas. These would likely be fairly inconsequential stories in the grand scheme of the overall show, but it would still feel like Downton. (And honestly, small stories are really what Fellowes does best if you ask me.)

My preferred method of getting around the “film/TV series having to exist simultaneously while not cannibalizing each other” problem is this – make a prequel. This allows the die-hard fans who will watch both movie and television show to feel that they are getting something unique and valuable from both experiences, but it won’t be so crucial to the forward progression of the show that those who miss the film would be angry. Plus, I’ve always wondered about life in the house when the Dowager Countess was the only Lady Grantham. I’d love to know how Cora and Robert’s marriage came together, what it was like in the very beginning, and when they decided that their relationship was more than one of convenience. Watching the early days of Cora and Violet’s relationship would also be interesting – while it seems the two get on fine now, back at the start of Series 1 it was implied that their relationship was a historically antagonistic one. And of course I’d love to meet Robert’s father, if that works in the timeline. I think there is a gold mine of stories and character histories to be mined from the early days of Downton Abbey – wouldn’t we all watch a story about how Carson came to Downton? About how Bates met Vera in the first place?  About O’Brien’s past?  (I’m getting kind of embarrassingly excited just thinking about how awesome all of that could be!)

Of course, all this speculation is moot if the movie project becomes something that happens only when the television series has concluded its run. But, as I’m hoping that Downton Abbey gets many more seasons on our television screens in the coming years, the problem of the franchise existing in multiple formats is one that I’ll happily encourage.

What about you all? Would you watch Downton: The Movie? Or would you prefer the series stay strictly on the small screen?