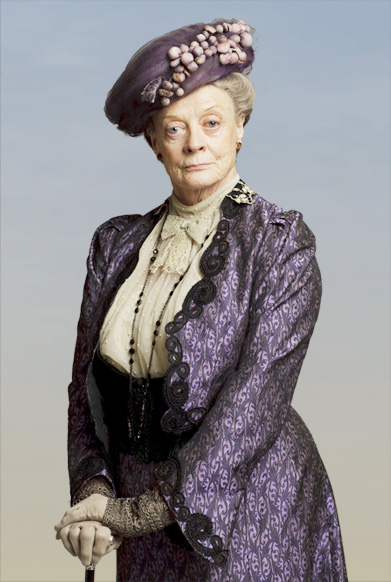 The Oscar, BAFTA and Emmy Award-winning actress is well known for fantastic performances on both stage and screen, including The Prime of Miss Jean Brodie, Travels with My Aunt, A Room with A View, Gosford Park, and her turn as Professor Minerva McGonagall in the Harry Potter films.

Her amazing performance as Violet, Dowager Countess of Grantham, is a major highlight of Downton Abbey. The delightfully imperious head of the Crawley family gets all the best lines, and Smith’s impeccable delivery is fantastic.

So, what better way to celebrate the birthday of such a great lady than to relive some of her best Downton moments? Click through for the most memorable scenes from the Dowager Countess – and be sure to share any favorites that may have been left out in the comments!

These are in no particular order, because I cannot bear to pick a favorite among such gems. And I’ve included clips where I could find them – Smith’s fantastic delivery deserves to be seen as well as read!

Matthew Crawley: They need someone who understands industrial law.

Lord Grantham: You do know I mean to involve you in the running of the estate?

Matthew Crawley: Oh, don’t worry, there are plenty of hours in the day. And of course I’ll have the weekend.

Dowager Countess: But…what is a weekend?

Dowager Countess: Why would you want to go to a real school? You're not a doctor's daughter.
Lady Sybil: Nobody learns anything from a governess, apart from French and how to curtsy.

Matthew Crawley: It’s not very modern; they were invented by Thomas Jefferson.

Dowager Countess: Why does every day involve a fight with an American?

Dowager Countess: One can’t go to pieces at the death of every foreigner. We’d all be in a constant state of collapse whenever we opened a newspaper.

Dowager Countess: You are quite wonderful the way you see room for improvement wherever you look. I never knew such reforming zeal.

Isobel Crawley: I take that as a compliment.

Dowager Countess: I must have said it wrong.

Dowager Countess: I can’t believe it. Last night he looked so well. Of course it *would* happen to a foreigner. It’s typical.

Dowager Countess: I’m not being ridiculous. No Englishman would *dream* of dying in someone else’s house – especially someone they didn’t even know.

Dowager Countess: So put that in your pipe and smoke it.

Lord Grantham: We better go in soon or it isn’t fair to Mrs. Padmore.

Dowager Countess: Oh, is her cooking so precisely timed? You couldn’t tell.

Dowager Countess: I’ve written to Susan. I said it was a story made up by Mr. Pamuk’s enemies, to discredit him. Even if she doesn’t believe me, she won’t tell in case it reflects badly on her. The ambassador is dangerous. But then, how many people really go to the Turkish embassy?
Lady Grantham: It only takes one.
Dowager Countess: Well, it just can’t be helped. We can’t have him assassinated. [Pause.] I suppose.

Here's hoping for many, many more great Dowager Countess one-liners when Series 2 kicks off in just 11 days! Did I miss any of your faves here? Do tell!