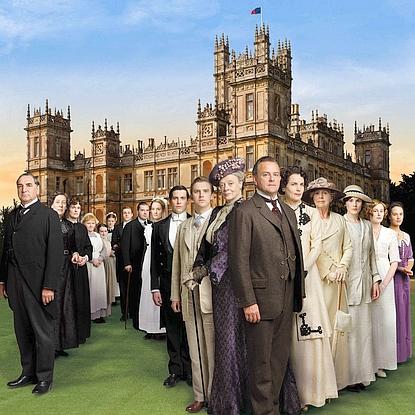 Thirteen days until the premiere of Downton Abbey Series 2! Today, we’ve got a bit of a history lesson to talk about, centered around the one of the series’ most central and confusing tenets – that Lady Mary Crawley cannot inherit Downton Abbey, her father’s estate. The reason? Much like the practice of primogeniture that regulates the Royal succession (the Crown passes to the first born male heir), there are also special laws and regulations – many of which date from as early as the 13th century – specific to inheritance and how the assets of the peerage – titles, estates, and land – may be passed down.

The reason that Mary cannot inherit Downton is because the estate is entailed to a male heir. Yes, the property has an entail, as Lord Robert, Lady Cora, the Dowager Countess and many other folks kept reminding us during the first series. But what IS an entail, exactly? Well, a “fee tail,” or an entail is “an estate of inheritance upon real property which cannot be which cannot be sold, devised by will, or otherwise alienated by the owner, but which passes by operation of law to the owner’s heirs upon his death” says Wikipedia. Great. So, what does that mean?

The entail is a limitation on the current owner's interest in the estate – Lord Robert doesn’t actually own Downton outright, he rather has something called a “fee tail,” which gives him a life interest in the property - he gets the estate during his lifetime, and if he were to pass this life interest to someone else, it would terminate with the owner’s death. Most importantly, this doesn’t give the current owner (resident might be a more correct term) the right to determine what happens to the estate after his death. The entail’s purpose is simple, to keep the land of a family intact in the main line of succession. The heir of entailed estate cannot sell the land, nor any piece thereof, nor bequeath it to anyone they fancy upon their deaths –like an illegitimate child, say.  “Fee tails” are created by words of grant in a deed, usually something like “to A and the heirs of his body,” though obviously that statement can be modified to reflect something like only the male heirs of his body, or even strictly female heirs (though no one seems to have done the latter very often).

Downton’s entail, for example, is written in such a way that the property can only pass to male heirs, no matter how far removed from the Earl’s core family that male might be - hence Matthew Crawley becoming the heir, though he is a third cousin and they have never met.  But, something that is important to realize about Matthew’s inheritance – as we’ve seen, he is the heir presumptive, and could have been displaced had Robert and Cora had a male heir. His right to the estate and the title is conditional, so he has no legal right to break the entail.

Additionally, during this time period, many great English estates often needed their heirs to marry rich young American women, because the majority of them – much like Lord Grantham – are land rich, but cash poor. Though the two were lucky enough to find a love match together and seem to be quite happy in their relationship now, the truth is that Robert married Cora simply because she was rich and the estate needed money - upon marriage, her fortune became contractually incorporated into the estate and the entail in perpetuity.  We’ve seen that for many of the Downton characters, duty is a primary motivator, probably for Lord Robert most of all, and we’ve seen he considers it his duty to do whatever is needed to secure the safety and prosperity of the estate – whether that’s marrying a rich American or letting the property pass to a third cousin and virtual stranger, rather than fight the entail. Robert accurately describes his predicament when he summarizes his relation to Downton as “I’m a custodian, not an owner.” He is the current resident of Downton, but that mostly means that his job is to take care of the estate for the next family member who takes over.

However, the issue for Mary in the first season of Downton is not just the question of losing her family home, but the fact that her mother’s fortune is also tied to the estate.  The first question is whether a specific portion of the marriage contract between Lord Robert and Cora can be broken, in order to separate Cora’s fortune from the estate itself and allow it (or at least a portion thereof) to pass to Mary. If this were to happen, Mary would immediately become a substantial heiress and her marriage prospects would be greatly improved (this fortune bought her mother a title after all).  However, decoupling Cora’s fortune from Downton virtually assures the decline, likely breakage and ultimate sale of the property, since it is these funds that allow the estate to continue to function and pay its bills – and that is why Lord Robert is so adamant that the property and the money have to stay together, and why the original marriage contract was written in such specific terms.

The second problem is the fact that Downton is an entailed estate, and the entail specifies it must pass to a male. While this may seem very unfair to modern viewers – particularly those of us who are women – entails were put in place for very specific reasons. The biggest threats facing landed estates during this time period were division and dissipation. If an estate were to be divided equally between multiple heirs over several generations, then it would inevitably be reduced enough that the smaller individual pieces would no longer keep the descendants among the gentry. Additionally, if the head of the family were to sell off the land – either to raise funds to pay debts or simply in some sort of frivolous indulgence – the family could likewise sink into ruin. Laws such as primogeniture and entailments were created to combat division and ensure that the family’s assets stayed intact and under the control of the head of the family in each generation.

Basically, even if the Crawleys were somehow successful in decoupling Cora’s fortune from the estate – doubtful, at best – the title, land and buildings would all still pass to Matthew, leaving him an earl without the funds necessary to sustain the property. Downton would then likely fall into disrepair, servants would have to be let go, and it may ultimately have to be sold. This is the primary motivation for Lord Robert’s decision that the money and the property and the title – everything – must go to Matthew, to ensure the safety of his life’s work.

This is an issue that still resonates today in Great Britain. Prime Minister David Cameron has been working with Parliament to change the Royal Succession’s centuries-old law of primogeniture, which ensures that the crown must first pass to a male heir, and can only pass to a woman if she has no male siblings (as in the case of the current Queen Elizabeth).  This change will make William and Kate’s first child the heir to the British throne, regardless of his or her gender. (Finally, right?)

However, several months ago, Lord Strathclyde, the leader of the House of Lords, said that the proposals to change the law regarding royal succession would not be extended to peers.  Downton creator Julian Fellowes led a campaign to extend similar changes to hereditary laws among the peerage – though it may be a bit personally motivated, as his wife currently cannot inherit her family’s viscountcy due to her gender. He called the laws governing hereditary titles “ridiculous” and “outrageous” in the 21st century.  However, Lord Strathclyde argues, “Changes to the rules governing succession to hereditary titles would be far more complicated to implement” than those concerning the monarchy, as more people would be affected.