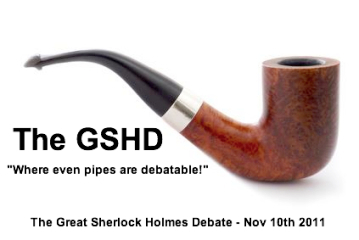 Something exceptionally cool is going on online right now – the start of the Great Sherlock Holmes Debate! This event features leading Holmes experts from the UK, USA, and Australia facing off in an attempt to answer the question – Which Sherlock Holmes adaptation makes the best contribution to Holmes in the 21st century? These experts have been split into teams – originally this event was supposed to only feature supporters of BBC’s Sherlock adaptation versus loyalists of Guy Ritchie’s recent Sherlock Holmes film, but a third team has been added for the “Traditionalists”, who feel that the traditional adaptations (Jeremy Brett’s series, especially) still have an important impact on modern audiences.  How awesome is this? I’m intensely jealous of all the folks who get to be part of the online audience (apparently fans from 23 countries scored tickets to the webinar) and watch this all go down.  If you’re really interested in the particulars, you can learn more about the folks representing each team here and the debate on Facebook as well.

As, I’m sure most of you have probably guessed by now, I’m firmly  on Team Cumberbatch BBC Sherlock personally.  Not that I would disparage any of these other fine adaptations, as they both have strong merits of their own, and, really, I’m generally of the opinion that the world can’t have too many versions of Sherlock Holmes running ‘round it. (Hey, I watch House too. Or at least I did, until that whole weird Cuddy storyline happened. But that’s another blog post.)

There’s plenty to like and debate about with each team though, so click through for a run-down on each and other assorted thoughts.

The Traditional Adaptations. This bucket’s a bit hard to define because this “team” encompasses support for several different versions of Holmes, a few of which are basically iconic. Jeremy Brett’s Holmes in particular, I’d say deserves the highest level of support in this category, though it’s also worth singling out Basil Rathbone by name. But Brett simply IS Sherlock Holmes to many people, and his portrayal is the picture many have in their head when someone says the name Holmes. Granted, there hasn’t been a new traditional adaptation of Sherlock in the last decade, but given the continued popularity of Brett’s portrayal (his Sherlock Holmes is still a popular program here at WETA), it’s hard to argue that his work isn’t still having a considerable impact on Holmes in the modern era. For a lot of viewers, this is how they were introduced to Sir Arthur Conan Doyle’s work; the episodes are quite faithful to the stories, and true to the Victorian time period and setting. There's a significant nostalgia factor - whether its for a certain actor in the role, or the trappings of period dress. And these versions likely the closest thing to actually “seeing” Conan Doyle’s text onscreen that you’ll get.  Though to be fair, because of that fact, these series can occasionally feel dated or slow moving to a modern viewer, though a new traditional version made in 2011 would probably be really something to see.

Guy Ritchie’s Sherlock Holmes.  Ritchie’s film is fun, fast paced, and put two bona fide movie stars into the roles of Holmes and Watson.  Its setting is something that’s less traditional – more of a steampunk version of what a kind of Victorian London might look like, and Ritchie’s Holmes has more hard edges and a few less smarts than his textual counterpart.  Robert Downey Jr’s performance oozes charm, but he occasionally comes across as more of a brawler than an intellectual, as well as occasionally more “crazy” than “eccentric.” Jude Law is, however, a great Watson and has some wonderfully snarky line delivery. The big plus in the Ritchie column as far as this debate is concerned is that Sherlock Holmes is a major feature film that brought Conan Doyle’s work to the big screen, scored impressive box office returns and spawned a sequel set to debut this Christmas. It surely brought some new fans into the fold, just by virtue of having the largest megaphone.  The downside of the feature film angle is that this often feels like an action movie that also happens to have the Baker Street boys in it and has many explosions, fights, and a love interest simply because this is a movie and that is what movies do.

BBC’s Sherlock. Producers Steven Moffat and Mark Gatiss have taken the Holmes canon and given it an entirely new paint job, dropping Holmes and Watson in modern London and giving them all the trappings that come with 21st century life.  I wrote a little bit about this the other day in that rather long love letter to “A Study in Pink,” but a big part of the reason the BBC Sherlock is so impressive, is because it manages to take something people feel they already know and recontextualize it so that it’s relevant to the world they’re currently living in, while still keeping faith with the essence of Conan Doyle’s work. Benedict Cumberbatch does a tremendous job as Sherlock - he’s a self-proclaimed “high-functioning sociopath” who is a brilliant, arrogant, stroppy jerk a lot of the time, but isn’t completely unfeeling.  And Martin Freeman’s Watson is amazing, perhaps the first time that the character has actually been fleshed out enough on his own that he can stand as nearly an equal to Sherlock, with his own set of issues that have nothing to do with sleuthing. Cumberbatch’s Holmes tilts very heavily towards the “eccentric loner genius” type though – frequently cold, cruel, and condescending, with very little concern about the feelings of others, this is an interpretation that could very well be difficult for a casual fan to like.

If I Had A Vote: Team BBC Sherlock. As a fan of the entire Holmes “franchise,” so to speak, I think it’s important to give the modern era a modern Sherlock. The BBC's adaptation is a Sherlock you believe could actually happen, might actually be happening right now, because it’s the world we recognize. The modern update makes the character, and his legacy, real and immediate for those who watch it, and to be honest, cool. Sherlock in a designer coat madly texting on a Blackberry is cool. And from a marketing perspective, that's gold. Moffat and Gatiss also did a wonderful job making sure that their modernization stays super respectful of its roots. Sherlock in a Belstaff is cooler than Sherlock in a deerstalker, but other than that, this version doesn't stray that far afield. The texting, the nicotine patches, and the constant cabs are all just modern updates on the telegrams, the pipe and the hansoms. Modern Sherlock’s obsession with technology seems like something that traditional Sherlock would approve of – considering that when Conan Doyle started writing the Holmes stories, Sherlock was a very modern sort of character who used the latest in cutting edge Victorian tools of the period. Unfortunately, these stories were written over several decades and society advanced a bit faster than Conan Doyle’s characters did, leading to a semi-historical feel even within its own publishing lifetime. (I’m not touching whether or not that was on purpose if Conan Doyle didn’t want to write Holmes anymore. That’s a whole other debate.)  Sherlock’s cutting-edge again and that's awesome.

Finally, I look at this debate a lot from the perspective of a Doctor Who fan.  Not because of the Moffat connection, but from the experience of loving something that’s been around longer than I’ve been alive.  “My” Doctor isn’t Matt Smith or David Tennant, but I’m over the moon that that is true for so many people, because that fact has revitalized and refreshed a franchise that’s turning fifty in 2013. They’ve turned countless new fans on to a really fantastic show who’d never heard of it before, who never would have watched it before, and somehow Doctor Who is even something approaching trendy in America now.  That’s what reinvention can do, and I’m always excited when someone who stumbles onto Smith’s Doctor, ends up watching Tom Baker’s. Reinvention is, a lot of times, just a doorway to what's come before.

That’s why I’m Team BBC Sherlock. Not just because it’s fantastic (it is) or because Cumberbatch is a great performer (he is), but because this is the kind of adaptation that gets people talking, that gets people excited, that gets people to download the complete Adventures of Sherlock Holmes anthology onto their Kindles and iPads, that gets people to try out the classic Brett or Rathbone versions if they’ve heard of them before. It’s introducing an entire new generation of readers and fans and debaters and theorists to these characters and these stories by grabbing hold of them where they live, and that’s something special.